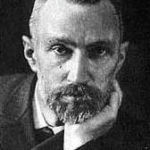 Why Is Pierre Curie Influential?

According to Wikipedia, Pierre Curie was a French physicist, a pioneer in crystallography, magnetism, piezoelectricity, and radioactivity. In 1903, he received the Nobel Prize in Physics with his wife, Marie Curie, and Henri Becquerel, "in recognition of the extraordinary services they have rendered by their joint researches on the radiation phenomena discovered by Professor Henri Becquerel". With their win, the Curies became the first ever married couple to win the Nobel Prize, launching the Curie family legacy of five Nobel Prizes.

Other Resources About Pierre Curie