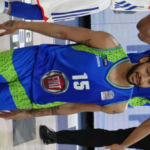 Why Is Pierriá Henry Influential?

According to Wikipedia, Pierriá Henry is an American-born naturalized Senegalese professional basketball player for Fenerbahçe of the Basketball Super League and the EuroLeague. He played college basketball for the University of North Carolina at Charlotte before playing professionally in Georgia, Germany, Israel, Turkey and Russia.

Other Resources About Pierriá Henry

What Schools Are Affiliated With Pierriá Henry?

Pierriá Henry is affiliated with the following schools: