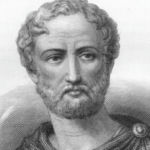 Why Is Pliny the Elder Influential?

According to Wikipedia, Gaius Plinius Secundus , called Pliny the Elder , was a Roman author, naturalist and natural philosopher, and naval and army commander of the early Roman Empire, and a friend of the emperor Vespasian. He wrote the encyclopedic Naturalis Historia , which became an editorial model for encyclopedias. He spent most of his spare time studying, writing, and investigating natural and geographic phenomena in the field.

Other Resources About Pliny the Elder

What Are Pliny the Elder's Academic Contributions?

Pliny the Elder has made the following academic contributions: