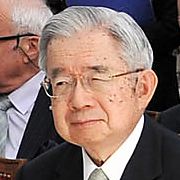 Masahito, Prince Hitachi is a member of the Imperial House of Japan and the younger brother of Emperor emeritus Akihito. He is the second son and sixth born child of Emperor Shōwa and Empress Kōjun and is third in line to the Chrysanthemum Throne. Prince Hitachi is mainly known for philanthropic activities and his research on the causes of cancer.