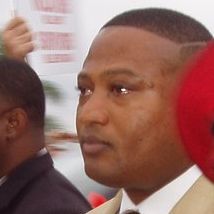 Quanell X is the leader of the New Black Panther Nation in Houston, Texas.Early life Quanell Ralph Evans was born in Los Angeles, California. Both parents were Nation of Islam converts. When they divorced, Evans moved to Houston to live with his mother and younger brother in the South Acres neighborhood, where he attended Worthing High School.