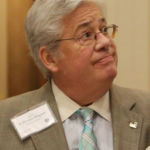 Why Is Tom Wagner Influential?

According to Wikipedia, Robert Thomas Wagner Jr. served as Delaware's state auditor from 1989 to 2019. A Republican, he lost to incumbent Democratic Auditor Dennis E. Greenhouse in 1986, but was appointed to the position in 1989 after Greenhouse resigned after being elected New Castle County County Executive. He was elected to full terms in 1990, 1994, 1998, 2002, 2006, 2010 and 2014. Prior to becoming auditor, Wagner was mayor of Camden, Delaware.

Other Resources About Tom Wagner

What Schools Are Affiliated With Tom Wagner?

Tom Wagner is affiliated with the following schools: