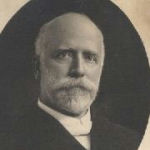 Why Is R. A. Torrey Influential?

According to Wikipedia, Reuben Archer Torrey was an American evangelist, pastor, educator, and writer. He aligned with Keswick theology. Biography Torrey was born in Hoboken, New Jersey, the son of a banker. He graduated from Yale University in 1875 and from Yale Divinity School in 1878, following which he became a Congregational minister in Garrettsville, Ohio. In 1879, he married Clara Smith, and they subsequently had five children.

Other Resources About R. A. Torrey

What Schools Are Affiliated With R. A. Torrey?

R. A. Torrey is affiliated with the following schools: