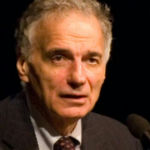 Why Is Ralph Nader Influential?

According to Wikipedia, Ralph Nader is an American political activist, author, lecturer, and attorney noted for his involvement in consumer protection, environmentalism, and government reform causes. The son of Lebanese immigrants to the United States, Nader attended Princeton University and Harvard Law School. He first came to prominence in 1965 with the publication of the bestselling book Unsafe at Any Speed, a highly influential critique of the safety record of American automobile manufacturers. Following the publication of Unsafe at Any Speed, Nader led a group of volunteer law students—dubbed "Nader's Raiders"—in an investigation of the Federal Trade Commission, leading directly to that agency's overhaul and reform. In the 1970s, Nader leveraged his growing popularity to establish a number of advocacy and watchdog groups including the Public Interest Research Group, the Center for Auto Safety, and Public Citizen. Two of Nader's most notable targets were the Chevy Corvair and the Ford Pinto.

Other Resources About Ralph Nader

What Schools Are Affiliated With Ralph Nader?

Ralph Nader is affiliated with the following schools:

What Are Ralph Nader's Academic Contributions?

Ralph Nader has made the following academic contributions: