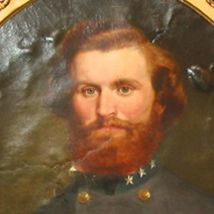 Randal William McGavock was an American lawyer, Democratic politician, Southern planter, and colonel in the Confederate States Army. He served as the Mayor of Nashville, Tennessee from 1858 to 1859.Early life Randal William McGavock was born on August 10, 1826 in Nashville, Tennessee. He was a fourth-generation Irish-American. His paternal grandfather's brother was Randal McGavock , who served as Mayor of Nashville from 1824 to 1825 and owned the Carnton plantation. His father, Jacob McGavock, fought in the Creek War of 1813–1814 with Andrew Jackson. His mother was Louisa Caroline McGavock. His maternal grandfather was Felix Grundy , U.S. Congressman from Tennessee from 1829 to 1838 and 13th United States Attorney General from 1838 to 1840.