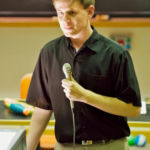 Creator of the webcomic xkcd

Why Is Randall Munroe Influential?

According to Wikipedia, Randall Patrick Munroe is an American cartoonist, author, and engineer best known as the creator of the award-winning webcomic xkcd. With a background in physics and robotics, Munroe has worked full-time on the comic since late 2006, publishing three times a week to a very large audience. Several of the strips, notably a visualisation of radioactivity levels, were also republished by other outlets. In addition to publishing a book of the webcomic's strips, he has written three books: What If?, Thing Explainer, and How To.

Other Resources About Randall Munroe

What Schools Are Affiliated With Randall Munroe?

Randall Munroe is affiliated with the following schools:

What Are Randall Munroe's Academic Contributions?

Randall Munroe has made the following academic contributions: