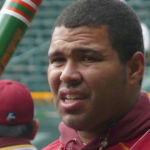 Why Is Randy Ruiz Influential?

According to Wikipedia, Randy Radames Ruiz is an American former professional baseball designated hitter and first baseman. He stands 6'1" and weighs 240 pounds. Born in The Bronx, New York to parents from Santurce, Puerto Rico, he attended James Monroe High School, and played baseball under coach Mike Turo. He then attended Bellevue University in Bellevue, Nebraska, where he played college level baseball. Ruiz was drafted in round 36 of the 1996 draft.

Other Resources About Randy Ruiz

What Schools Are Affiliated With Randy Ruiz?

Randy Ruiz is affiliated with the following schools: