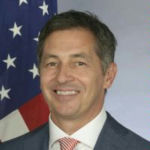 Why Is Randy W. Berry Influential?

According to Wikipedia, Randy William Berry is an American diplomat. He served as the first Special Envoy for the Human Rights of LGBTI Persons in the United States Department of State, as well as a Deputy Assistant Secretary in the Bureau of Democracy, Human Rights, and Labor. He was nominated to be the next U.S. Ambassador to Nepal by President Donald Trump in May 2018 and confirmed by the Senate on September 6, 2018. Berry presented his credentials to Nepali President Bidya Devi Bhandari on October 25, 2018. Berry is one of five LGBT appointed ambassadors under the Trump administration.

Other Resources About Randy W. Berry

What Schools Are Affiliated With Randy W. Berry?

Randy W. Berry is affiliated with the following schools: