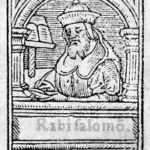 Why Is Rashi Influential?

According to Wikipedia, Shlomo Yitzchaki , today generally known by the acronym Rashi , was a medieval French rabbi and author of a comprehensive commentary on the Talmud and commentary on the Hebrew Bible . Acclaimed for his ability to present the basic meaning of the text in a concise and lucid fashion, Rashi appeals to both learned scholars and beginner students, and his works remain a centerpiece of contemporary Jewish study. His commentary on the Talmud, which covers nearly all of the Babylonian Talmud , has been included in every edition of the Talmud since its first printing by Daniel Bomberg in the 1520s. His commentary on Tanakh—especially on the Chumash —serves as the basis for more than 300 "supercommentaries" which analyze Rashi's choice of language and citations, penned by some of the greatest names in rabbinic literature.

Other Resources About Rashi