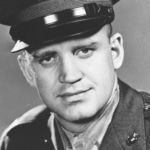 Why Is Raymond G. Murphy Influential?

According to Wikipedia, Captain Raymond Gerald "Jerry" Murphy was the 39th United States Marine to receive the Medal of Honor for heroism in the Korean War. He was decorated by President Dwight D. Eisenhower in a White House ceremony on October 27, 1953. He earned the Nation's highest military decoration for heroic action for valor in the Reno-Vegas fighting of February 1953.

Other Resources About Raymond G. Murphy

What Schools Are Affiliated With Raymond G. Murphy?

Raymond G. Murphy is affiliated with the following schools: