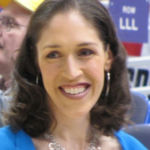 Why Is Rebecca Lobo Influential?

According to Wikipedia, Rebecca Rose Lobo-Rushin is an American television basketball analyst and former women's basketball player in the Women's National Basketball Association from 1997 to 2003. Lobo, at 6'4", played the center position for much of her career. Lobo played college basketball at the University of Connecticut, where she was a member of the team that won the 1995 national championship, going 35–0 on the season in the process. Lobo was inducted into the Women's Basketball Hall of Fame in 2010. In April 2017, she was announced as one of the members of the 2017 class of the Naismith Memorial Basketball Hall of Fame, alongside Tracy McGrady and Muffet McGraw.

Other Resources About Rebecca Lobo

What Schools Are Affiliated With Rebecca Lobo?

Rebecca Lobo is affiliated with the following schools: