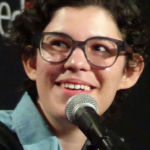 Why Is Rebecca Sugar Influential?

According to Wikipedia, Rebecca Rea Sugar is an American animator and screenwriter. She is best known for being the creator of the Cartoon Network series Steven Universe, making her the first non-binary person to independently create a series for the network. Until 2013, Sugar was a writer and storyboard artist on the animated television series Adventure Time. Her work on the two series has earned her seven Primetime Emmy Award nominations. Sugar is bisexual, non-binary, and genderqueer, using both she/her and they/them pronouns. Sugar's queerness has served as the inspiration for her to stress the importance of LGBT representation in the arts, especially in children's entertainment.

Other Resources About Rebecca Sugar

What Schools Are Affiliated With Rebecca Sugar?

Rebecca Sugar is affiliated with the following schools: