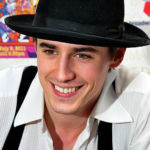 Why Is Reeve Carney Influential?

According to Wikipedia, Reeve Jefferson Carney is an American actor and singer-songwriter. He is best known for originating the role of Peter Parker/Spider-Man in Spider-Man: Turn Off the Dark on Broadway and playing Orpheus in the original Broadway cast of the Tony Award-winning musical Hadestown. He also played Dorian Gray in the Showtime series Penny Dreadful, and Riff Raff in the Fox musical television film The Rocky Horror Picture Show: Let's Do the Time Warp Again.

Other Resources About Reeve Carney

What Schools Are Affiliated With Reeve Carney?

Reeve Carney is affiliated with the following schools: