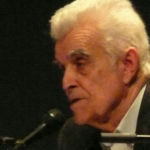 Why Is René Girard Influential?

According to Wikipedia, René Noël Théophile Girard was a French polymath, historian, literary critic, and philosopher of social science whose work belongs to the tradition of philosophical anthropology. Girard was the author of nearly thirty books, with his writings spanning many academic domains. Although the reception of his work is different in each of these areas, there is a growing body of secondary literature on his work and his influence on disciplines such as literary criticism, critical theory, anthropology, theology, psychology, mythology, sociology, economics, cultural studies, and philosophy.

Other Resources About René Girard

What Schools Are Affiliated With René Girard?

René Girard is affiliated with the following schools:

What Are René Girard's Academic Contributions?

René Girard has made the following academic contributions: