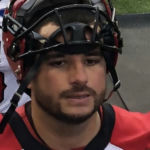 Why Is Rene Paredes Influential?

According to Wikipedia, Rene Paredes is a professional Canadian football placekicker for the Calgary Stampeders of the Canadian Football League. He is a two-time Grey Cup champion after winning with the Stampeders in 2014 and 2018 and is a three-time CFL All-Star. He also won the John Agro Special Teams Award as the CFL's Most Outstanding Special Teams player in .

Other Resources About Rene Paredes

What Schools Are Affiliated With Rene Paredes?

Rene Paredes is affiliated with the following schools: