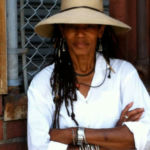 Why Is Renée Gunter Influential?

According to Wikipedia, Renée Gunter is an American landscape designer based in Los Angeles, California. She is notable for drought-tolerant gardens.Her garden was profiled by ABC News for its water conservation ability during an extended drought for the region. Gunter designed and restored several local neighborhood gardens and parks, and began a landscape firm called Urbanscapes. On one assignment, she asked what the client wanted from a front yard, and to meet the needs of water conservation, beauty, and privacy, Gunter recycled a fence, mounded organic earth strategically to elevate selected areas, and planted large drought-resistant plants to make the house almost invisible from many perspectives to form a "kind of private park". She encourages neighbors to conserve water while organizing large block parties to build community ties. Gunter uses plant groups acclimatized for low water consumption; drought-resistant plants at her own garden include Agave weberi and Acacia baileyana along with other grasses and ground covers, and features a dry 'riverbed' in the middle for walking. Her yard has been described as the only "certified wildlife habitat" in southern Los Angeles. Her conservation efforts have been lauded publicly by water officials. In 2013 she also launched a mobile organic produce service called "DO! Daily Organics", delivering fruits and vegetables to residents of South Los Angeles, with a storefront built from a discarded shipping container.

Other Resources About Renée Gunter

What Schools Are Affiliated With Renée Gunter?

Renée Gunter is affiliated with the following schools: