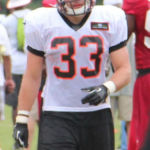 Why Is Rex Burkhead Influential?

According to Wikipedia, Rex Burkhead is an American football running back for the Houston Texans of the National Football League . He played college football at Nebraska and was selected by the Cincinnati Bengals in the sixth round of the 2013 NFL Draft. After four seasons with the Bengals, Burkhead spent his next four seasons with the New England Patriots, where he appeared in consecutive Super Bowls and won Super Bowl LIII. Burkhead joined the Texans in 2021.

Other Resources About Rex Burkhead