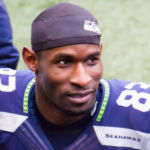 Why Is Ricardo Lockette Influential?

According to Wikipedia, Ricardo Quantaye Lockette is a former professional American football wide receiver who played in parts of four seasons for the Seattle Seahawks of the National Football League. Born in Albany, Georgia, Lockette played college football at Fort Valley State University and was signed by the Seahawks as an undrafted free agent in 2011.

Other Resources About Ricardo Lockette

What Schools Are Affiliated With Ricardo Lockette?

Ricardo Lockette is affiliated with the following schools: