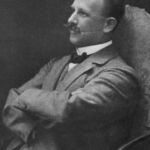 Why Is Richard Abegg Influential?

According to Wikipedia, Richard Wilhelm Heinrich Abegg was a German chemist and pioneer of valence theory. He proposed that the difference of the maximum positive and negative valence of an element tends to be eight. This has come to be known as Abegg's rule. He was a gas balloon enthusiast, which caused his death at the age of 41 when he crashed in his balloon in Silesia.

Other Resources About Richard Abegg

What Schools Are Affiliated With Richard Abegg?

Richard Abegg is affiliated with the following schools: