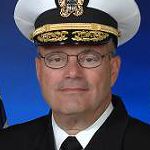 Richard C. Vinci is a retired United States Navy rear admiral. He served as the 35th Chief of the United States Navy Dental Corps. He retired in July 2011, after 42 years of naval service. Admiral Vinci is a member of the International College of Dentists, Academy of Operative Dentistry, American Dental Association, American Board of Operative Dentistry, and the American College of Dentists.