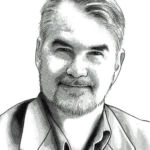 Why Is Richard Corliss Influential?

According to Wikipedia, Richard Nelson Corliss was an American film critic and magazine editor for Time. He focused on movies, with occasional articles on other subjects. He was the former editor-in-chief of Film Comment and authored several books including Talking Pictures, which, along with other publications, drew early attention to the screenwriter, as opposed to the director.

Other Resources About Richard Corliss

What Schools Are Affiliated With Richard Corliss?

Richard Corliss is affiliated with the following schools: