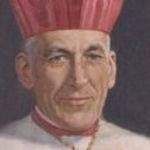 Why Is Richard Cushing Influential?

According to Wikipedia, Richard James Cushing was an American prelate of the Catholic Church. He served as Archbishop of Boston from 1944 to 1970 and was made a cardinal in 1958. Cushing's main role was as fundraiser and builder of new churches, schools, and institutions. Unlike his predecessor, he was on good terms with practically the entire Boston elite, as he softened the traditional confrontation between the Catholic Irish and the Protestant upper-class. He built useful relationships with Jews, Protestants, and institutions outside the usual Catholic community. He helped presidential candidate John F. Kennedy deflect fears of papal interference in American government if a Catholic became president.

Other Resources About Richard Cushing

What Schools Are Affiliated With Richard Cushing?

Richard Cushing is affiliated with the following schools:

What Are Richard Cushing's Academic Contributions?

Richard Cushing has made the following academic contributions: