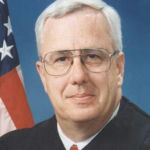 Why Is Richard G. Kopf Influential?

According to Wikipedia, Richard George Kopf is a Senior United States District Judge of the United States District Court for the District of Nebraska. Education and early career Kopf received his Bachelor of Arts degree from Kearney State College in 1969, where he was a member of Phi Kappa Tau fraternity. He received his Juris Doctor from the University of Nebraska–Lincoln College of Law in 1972. He was a law clerk for Judge Donald Roe Ross of the United States Court of Appeals for the Eighth Circuit for two years following law school and then entered private practice in Lexington, Nebraska. In 1984, he served as counsel for the State of Nebraska in the impeachment of the Nebraska Attorney General.

Other Resources About Richard G. Kopf

What Schools Are Affiliated With Richard G. Kopf?

Richard G. Kopf is affiliated with the following schools: