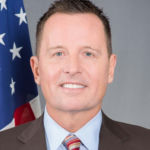 Why Is Richard Grenell Influential?

According to Wikipedia, Richard Allen Grenell is an American political operative, diplomat, TV personality and public relations consultant who served as Acting Director of National Intelligence in President Donald Trump’s Cabinet in 2020. A member of the Republican Party, Grenell served as the United States Ambassador to Germany from 2018 to 2020 and as the Special Presidential Envoy for Serbia and Kosovo Peace Negotiations from 2019 to 2021. He is the first openly gay cabinet member in US History.

Other Resources About Richard Grenell

What Schools Are Affiliated With Richard Grenell?

Richard Grenell is affiliated with the following schools: