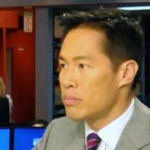 Why Is Richard Lui Influential?

According to Wikipedia, Richard Lui is an American journalist and news anchor for MSNBC and NBC News. Lui is currently a breaking news anchor for NBC and MSNBC, broadcasting from 30 Rockefeller Plaza in Midtown Manhattan, New York City. prior to that role he was a co-host of Early Today, and anchor of MSNBC daytime coverage. He was formerly at CNN Worldwide. At CNN Worldwide he became the first Asian American male to anchor a daily, national cable news show when he solo anchored the 10 a.m. hour on CNN Headline News . Mediaite ranked Lui among the top 100 in news buzz on its "Power Grid Influence Index of TV Anchors and Hosts" and one of "The 50 Sexiest in TV News".

Other Resources About Richard Lui

What Schools Are Affiliated With Richard Lui?

Richard Lui is affiliated with the following schools: