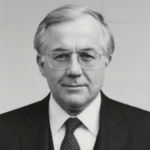 Why Is Richard V. Allen Influential?

According to Wikipedia, Richard Vincent Allen was the United States National Security Advisor to President Ronald Reagan from 1981 to 1982, having been Reagan's chief foreign policy advisor from 1977. He has been a fellow of the Hoover Institution since 1983. He is a past member of the Defense Policy Board Advisory Committee.

Other Resources About Richard V. Allen

What Schools Are Affiliated With Richard V. Allen?

Richard V. Allen is affiliated with the following schools: