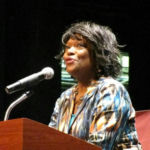 Why Is Rita Dove Influential?

According to Wikipedia, Rita Frances Dove is an American poet and essayist. From 1993 to 1995, she served as Poet Laureate Consultant in Poetry to the Library of Congress. She is the first African American to have been appointed since the position was created by an act of Congress in 1986 from the previous "consultant in poetry" position . Dove also received an appointment as "special consultant in poetry" for the Library of Congress's bicentennial year from 1999 to 2000. Dove is the second African American to receive the Pulitzer Prize for Poetry, in 1987, and she served as the Poet Laureate of Virginia from 2004 to 2006. Since 1989, she has been teaching at the University of Virginia in Charlottesville, where she held the chair of Commonwealth Professor of English from 1993 to 2020; as of 2020 she holds the chair of Henry Hoyns Professor of Creative Writing.

Other Resources About Rita Dove

What Schools Are Affiliated With Rita Dove?

Rita Dove is affiliated with the following schools:

What Are Rita Dove's Academic Contributions?

Rita Dove has made the following academic contributions: