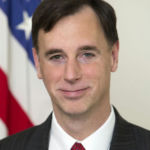 Why Is Rob Joyce Influential?

According to Wikipedia, Robert E. Joyce is an American cybersecurity official who served as special assistant to the President and Cybersecurity Coordinator on the U.S. National Security Council. He also began serving as White House Homeland Security Adviser to President Donald Trump on an acting basis after the resignation of Tom Bossert from April 10, 2018 to May 31, 2018. He completed his detail to the White House in May 2018 and returned to the National Security Agency. where he is now the Senior Advisor to the Director NSA for Cyber Security Strategy, Joyce previously performed as acting Deputy Homeland Security Advisor since October 13, 2017. On January 15, 2021 the NSA announced that Joyce would replace Anne Neuberger as its Director of Cybersecurity.

Other Resources About Rob Joyce

What Schools Are Affiliated With Rob Joyce?

Rob Joyce is affiliated with the following schools: