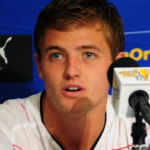 Why Is Robbie Rogers Influential?

According to Wikipedia, Robert Hampton Rogers III is an American television producer and former professional soccer player. He played as a winger and as a left back. Rogers has also represented the United States men's national soccer team. In February 2013, Rogers came out as gay, becoming the second male soccer player in Britain to do so after Justin Fashanu in 1990. After a brief retirement, he became the first openly gay man to compete in a top North American professional sports league when he played his first match for the LA Galaxy in May 2013.

Other Resources About Robbie Rogers

What Schools Are Affiliated With Robbie Rogers?

Robbie Rogers is affiliated with the following schools: