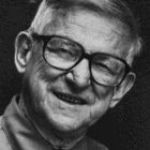 Why Is Robert Cormier Influential?

According to Wikipedia, Robert Edmund Cormier was an American author and journalist, known for his deeply pessimistic novels, many of which were written for young adults. Recurring themes include abuse, mental illness, violence, revenge, betrayal, and conspiracy. In most of his novels, the protagonists do not win.

Other Resources About Robert Cormier

What Schools Are Affiliated With Robert Cormier?

Robert Cormier is affiliated with the following schools:

What Are Robert Cormier's Academic Contributions?

Robert Cormier has made the following academic contributions: