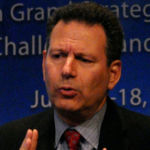 Why Is Robert D. Kaplan Influential?

According to Wikipedia, Robert David Kaplan is an American author. His books are on politics, primarily foreign affairs, and travel. His work over three decades has appeared in The Atlantic, The Washington Post, The New York Times, The New Republic, The National Interest, Foreign Affairs and The Wall Street Journal, among other newspapers and publications.

Other Resources About Robert D. Kaplan

What Schools Are Affiliated With Robert D. Kaplan?

Robert D. Kaplan is affiliated with the following schools: