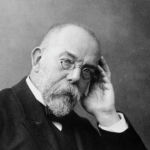 Why Is Robert Koch Influential?

According to Wikipedia, Heinrich Hermann Robert Koch was a German physician and microbiologist. As the discoverer of the specific causative agents of deadly infectious diseases including tuberculosis, cholera , and anthrax, he is regarded as one of the main founders of modern bacteriology. As such he is popularly nicknamed the father of microbiology , and as the father of medical bacteriology. His discovery of the anthrax bacterium in 1876 is considered as the birth of modern bacteriology. His discoveries directly provided proofs for the germ theory of diseases, and the scientific basis of public health.

Other Resources About Robert Koch

What Schools Are Affiliated With Robert Koch?

Robert Koch is affiliated with the following schools: