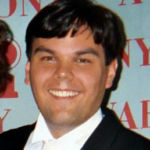 Why Is Robert Lopez Influential?

According to Wikipedia, Robert "Bobby" Lopez is an American songwriter for musicals, best known for co-creating The Book of Mormon and Avenue Q, and for co-writing the songs featured in the Disney computer-animated films Frozen, its sequel, Frozen II, and Coco, with his wife Kristen Anderson-Lopez. Of only seventeen people who have won an Emmy, a Grammy, an Oscar and a Tony Award, nicknamed by Philip Michael Thomas in 1984 as the "EGOT", he is the youngest and quickest to win all four, and, as of 2022, is the only person to have won all four awards more than once .

Other Resources About Robert Lopez

What Schools Are Affiliated With Robert Lopez?

Robert Lopez is affiliated with the following schools: