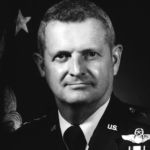 Why Is Robert M. Bond Influential?

According to Wikipedia, Robert M. Bond was a lieutenant general of the United States Air Force . He saw combat in Korea and three tours of Vietnam, before becoming an instructor and then vice-commander of an organization which developed and evaluated weaponry for the USAF. He was decorated for his combat service and his peacetime role. He died in an accident in Nevada while flying a Soviet-built Mikoyan-Gurevich MiG-23 jet fighter-bomber.

Other Resources About Robert M. Bond

What Schools Are Affiliated With Robert M. Bond?

Robert M. Bond is affiliated with the following schools: