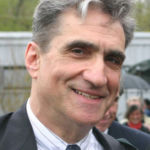 Why Is Robert Pinsky Influential?

According to Wikipedia, Robert Pinsky is an American poet, essayist, literary critic, and translator. From 1997 to 2000, he served as Poet Laureate Consultant in Poetry to the Library of Congress. Pinsky is the author of nineteen books, most of which are collections of his poetry. His published work also includes critically acclaimed translations, Dante Alighieri's Inferno and The Separate Notebooks by Czesław Miłosz. He teaches at Boston University.

Other Resources About Robert Pinsky

What Schools Are Affiliated With Robert Pinsky?

Robert Pinsky is affiliated with the following schools:

What Are Robert Pinsky's Academic Contributions?

Robert Pinsky has made the following academic contributions: