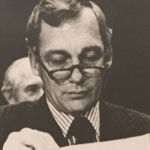 Why Is Robert White Influential?

According to Wikipedia, Robert Edward White was an American career diplomat who served as US Ambassador to Paraguay and to El Salvador . He then became president of the Center for International Policy. Background and family life He was born in Melrose, Massachusetts. White served in the US Navy from 1944 to 1946, and after the war benefitted from the G.I. Bill. He graduated from Saint Michael's College in 1952, and after a Fulbright Scholarship graduated from The Fletcher School of Law and Diplomacy in 1954.

Other Resources About Robert White

What Schools Are Affiliated With Robert White ?

Robert White is affiliated with the following schools: