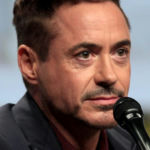 Why Is Robert Downey Jr. Influential?

According to Wikipedia, Robert John Downey Jr. is an American actor and producer. His career has been characterized by critical and popular success in his youth, followed by a period of substance abuse and legal troubles, before a resurgence of commercial success later in his career. In 2008, Downey was named by Time magazine among the 100 most influential people in the world, and from 2013 to 2015, he was listed by Forbes as Hollywood's highest-paid actor.

Other Resources About Robert Downey Jr.