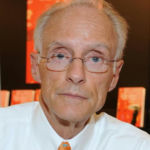 Why Is Robin Cook Influential?

According to Wikipedia, Robert Brian "Robin" Cook is an American physician and novelist who writes about medicine and topics affecting public health.He is best known for combining medical writing with the thriller genre. Many of his books have been bestsellers on The New York Times Best Seller List. Several of his books have also been featured in Reader's Digest. His books have sold nearly 400 million copies worldwide.

Other Resources About Robin Cook

What Schools Are Affiliated With Robin Cook ?

Robin Cook is affiliated with the following schools:

Robin Cook has made the following academic contributions: