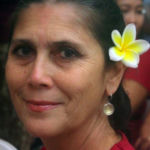 Why Is Robin Lim Influential?

According to Wikipedia, Robin Lim is a midwife and founder of Yayasan Bumi Sehat health clinics, which offer free prenatal care, birthing services and medical aid to anyone who needs it. She and her team have been working since 2003 to combat Indonesia's high maternal and infant mortality rates, and the Bumi Sehat birth centers serve many at-risk mothers. She was awarded the 2011 CNN Hero of the Year award by the CNN news network for helping thousands of low-income women in Indonesia with healthy pregnancy and birth services.

Other Resources About Robin Lim

What Schools Are Affiliated With Robin Lim?

Robin Lim is affiliated with the following schools: