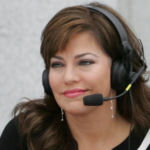 Why Is Robin Meade Influential?

According to Wikipedia, Robin Michelle Meade is an American television news anchor. She is the lead news anchor for HLN's morning show Morning Express with Robin Meade. Meade is a former Miss Ohio and began her broadcasting career with local stations in that state. She joined HLN in 2001. She has won a regional Emmy Award. Meade released country music albums in 2011 and 2013.

Other Resources About Robin Meade

What Schools Are Affiliated With Robin Meade?

Robin Meade is affiliated with the following schools: