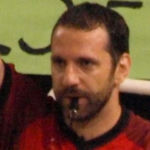 Why Is Rod Brown Influential?

According to Wikipedia, Lelton Gerard "Rod" Brown is an American former professional basketball player. Born in Dallas, Texas, he holds dual British-American citizenship. Professional career After graduating from Western Michigan University in 2000, the point guard joined English team Greater London Leopards. When the franchise folded in 2003, Brown joined Chester Jets but walked out on the team during pre-season training before even playing a game, and subsequently joined Leopards' former rivals London Towers. In 2005, Brown moved to Spain to play for lower-league CB Inca, and the following year made the step-up to the Liga ACB – one of Europe's top leagues – to play for Menorca Bàsquet.

Other Resources About Rod Brown

What Schools Are Affiliated With Rod Brown?

Rod Brown is affiliated with the following schools: