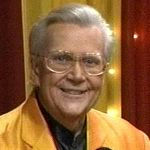 Why Is Rod Roddy Influential?

According to Wikipedia, Robert Ray "Rod" Roddy was an American radio and television announcer. He was primarily known for his role as an offstage announcer on game shows. Among the shows that he announced are the CBS game shows Whew! and Press Your Luck. He is widely recognized by the signature line, "Come on down!" from The Price Is Right, and it appears on his grave marker, although the phrase was originated and made popular by his predecessor Johnny Olson. Roddy succeeded original announcer Olson on The Price Is Right and held the role from 1986 until his death in 2003, and as of 2020, is the longest-serving announcer on the current incarnation of the show. On many episodes of Press Your Luck and The Price Is Right, Roddy appeared on camera. He was also the voice of Mike the microphone on Disney's House of Mouse from 2001 until his death in 2003.

Other Resources About Rod Roddy

What Schools Are Affiliated With Rod Roddy?

Rod Roddy is affiliated with the following schools: