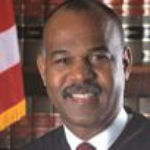 Why Is Roger Gregory Influential?

According to Wikipedia, Roger L. Gregory is the Chief United States Circuit Judge of the United States Court of Appeals for the Fourth Circuit. Background Gregory was born in Philadelphia, Pennsylvania but grew up in Petersburg, Virginia. He earned his Bachelor of Arts degree summa cum laude from Virginia State University in 1975 and his Juris Doctor from the University of Michigan Law School in 1978. He worked as an associate for Butzel Long and Hunton & Williams from 1978 until 1982. He co-founded the Richmond, Virginia law firm of Wilder & Gregory in 1982 with L. Douglas Wilder , and became the chair of its litigation section in 1985. Gregory is also a member of several fraternal organizations, including Omega Psi Phi fraternity, and Sigma Pi Phi fraternity.

Other Resources About Roger Gregory

What Schools Are Affiliated With Roger Gregory?

Roger Gregory is affiliated with the following schools: