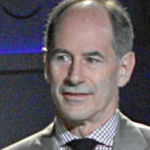 Why Is Roger Martin Influential?

According to Wikipedia, Roger Martin is the former Dean of the Rotman School of Management at the University of Toronto from 1998 to 2013 and an author of several business books. Martin has expanded several important business concepts in use today, including integrative thinking. He has been recognized by several business publications as one of the field's most important thinkers.

Other Resources About Roger Martin

What Schools Are Affiliated With Roger Martin ?

Roger Martin is affiliated with the following schools: