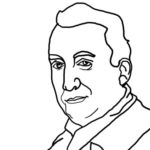 Why Is Roland Barthes Influential?

According to Wikipedia, Roland Gérard Barthes was a French literary theorist, essayist, philosopher, critic, and semiotician. His work engaged in the analysis of a variety of sign systems, mainly derived from Western popular culture. His ideas explored a diverse range of fields and influenced the development of many schools of theory, including structuralism, anthropology, literary theory, and post-structuralism.

Other Resources About Roland Barthes

What Are Roland Barthes's Academic Contributions?

Roland Barthes has made the following academic contributions: