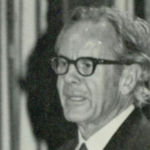 Why Is Rollo May Influential?

According to Wikipedia, Rollo Reece May was an American existential psychologist and author of the influential book Love and Will . He is often associated with humanistic psychology and existentialist philosophy, and alongside Viktor Frankl, was a major proponent of existential psychotherapy. The philosopher and theologian Paul Tillich was a close friend who had a significant influence on his work.

Other Resources About Rollo May

What Schools Are Affiliated With Rollo May?

Rollo May is affiliated with the following schools:

What Are Rollo May's Academic Contributions?

Rollo May has made the following academic contributions: